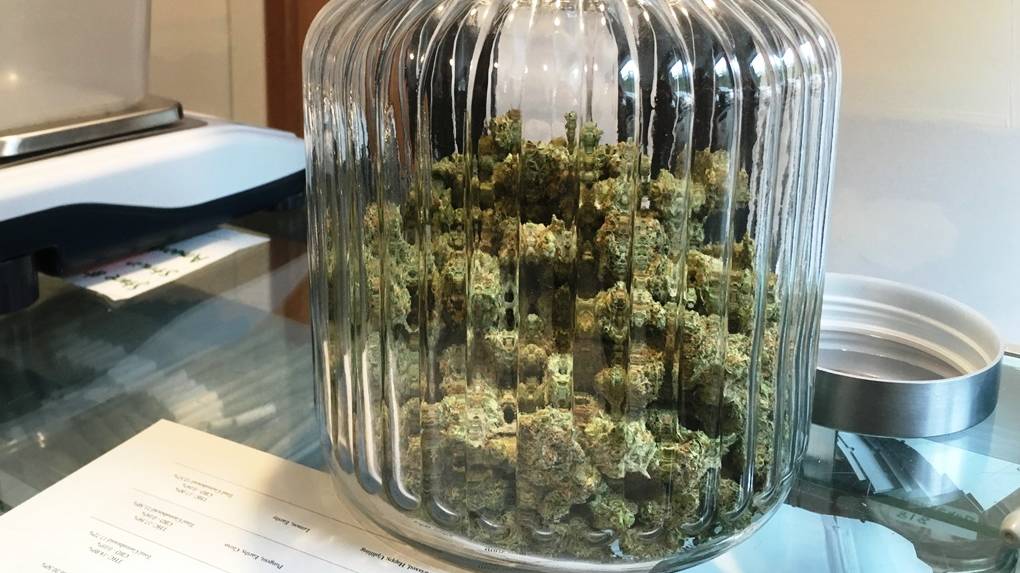 A jar of marijuana buds can be seen at Stoney Moose in Ketchikan. (Leila Kheiry / KRBD)

Alaska’s cannabis industry has sales of tens of millions of dollars each year. After all, the state has the largest number of cannabis retail stores per capita in the country.

So it may seem like there’s a lot of money out there for cannabis users. However, insiders say the industry is very competitive and cannabis entrepreneurs need to be smart to keep their business alive.

A recent article in the Anchorage Daily News looked at this competitiveness.

The following transcript has been edited slightly for the sake of clarity.

Zacharias Hughes: One of them is only purely historical. And that’s because Alaska didn’t have a medical cannabis industry before legalization and the recreational industry rose in 2016. So some other states, notably California and some other west coast states, had medical apparatus. And when legalization took place, there was decriminalization, the medical cannabis business was somehow rearranged, or at least there was some infrastructure. We didn’t have that in Alaska. So the industry here was built from the ground up.

But some of the other nuances we have, there is no cap on licenses in Alaska. Other states have caps and that makes the price of a permit much more valuable as there is a cap on how many people can participate. I spoke to an attorney who serves a number of cannabis clients who mentioned Arizona, where there is a really hard cap and permits for growing and selling cannabis can go into the eight figures, which overwhelmed me but is true.

The other thing that not many other states have is a very fixed residency requirement in the form of PFD recipients in order not to have a business license and to be part of the cannabis business.

And so there is not much money from abroad that can legally flow in and support companies. In other states, there are a few very large, multi-state companies involved in the cannabis sector, as well as growing and selling. And we don’t have that.

Casey Grove: How are some of the unique features of Alaska affecting the industry now?

Zacharias Hughes: Well, according to a report from Politico, we have the highest number of cannabis retail stores per capita of any state we studied. You’ve mostly looked at western states where the market really is the biggest, but we have more pot shops per capita than anywhere else. There are a number of cultivators out there, there are a number of manufacturers, but we know it’s up close to 140 or 150 retail stores.

I would almost call it a patchwork quilt of the Wildcat industry here, you know, there are a lot of independent small operators working together and competing for market share. But there are just a lot of small businesses, very small businesses, some of them are literally mom-and-pop or family businesses, and not many of them are that big. There are few companies that have multiple retail websites.

Casey Grove: And I think some think that some of these companies need to get bigger in order to stay profitable in the future, right? And integrating vertically I think is what you said in your story, right?

Zacharias Hughes: Yes. And that was a trend that I had heard about from the start that there was, you know, this kind of race for vertical integration when companies started opening up. This basically means that you control all the different steps from sowing to selling. So you have a company that maybe started growing cannabis products and then got into manufacturing and then retailing, and many of them have done so in different orders. But basically, you could grow your product, refine it, make it, and things like edibles or concentrates or flower products that you then sell in your retail store. And that was always seen as a way to give companies more flexibility.

The thing is, it’s pretty expensive to integrate vertically. Cannabis companies are expensive anywhere in the country, and that is certainly true in Alaska. And one of the by-products of the costliness is that you will need a lot of money to start new businesses because cannabis is still federally illegal, illegal, or some kind of that seedy gray area. Banks are not going to give loans to these people. So, in order to start a new business, you need to have your own money. It’s a very cash-intensive business, especially since there are so few funding options for people as you know them in other industries.

The other thing is that it’s a very regulated business. And what I’ve heard from a lot of people is that a lot of companies don’t make it. You work with wafer-thin margins, there is intense price competition between producers and retailers. And I think we’re likely to see more companies go under, and it’s a long process. That’s, you know, at least a year to get a license to grow, manufacture, or sell cannabis. It is very expensive. And we’ve seen dozens of companies that have already collapsed in the five years since the industry started because it’s just not a very profitable business right now considering how open the market is.

Moroccan government supports the legalization of hashish for medical purposes –...

Colorado Voters Will Decide Whether to Increase Cannabis Sales Tax to...