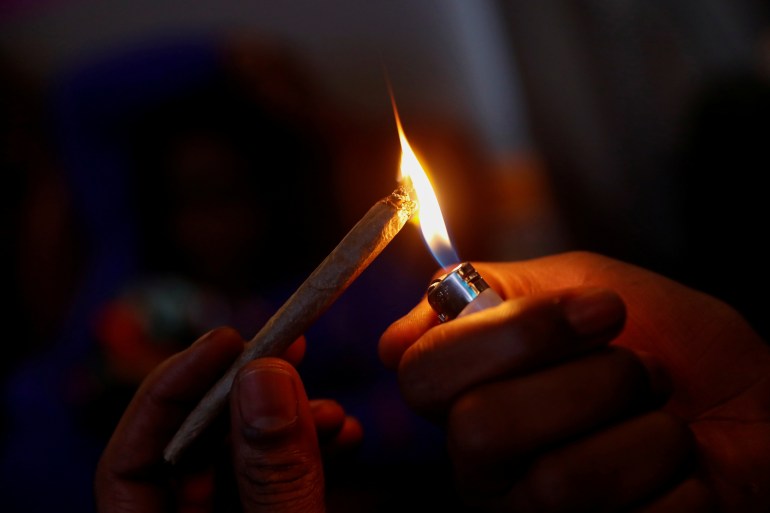 The U.S. cannabis business has a particular cash flow problem – too much of it.

Marijuana can be legally sold for medicinal purposes in 36 states and the District of Columbia (DC) and in 15 of them and in DC for recreational use. However, at the federal level, it is still illegal, which means that most banks will refuse to serve the industry if they break money laundering laws.

With the COVID-19 pandemic and increasing legalization leading to an increase in cannabis use, the producers, manufacturers and retailers of the sector are inundated with cash, covering the most basic business transactions from paying employees to filing taxes to paying Finding a storage location adds risks and costs to income.

“All the money that is pouring around is just a recipe for disaster,” said Smoke Wallin, managing director of hemp health products manufacturer Vertical Wellness Inc. “How do you explain that?” Where do you keep it How do you move it Even in a safe, this is a security risk for employees. “

Ryan Hale, a US Navy veteran and co-founder of cash management company Operational Security Solutions, had to convince a cannabis farmer in California to stop hiding cash in a tree. On another occasion, Hale had to help a confused retailer who had lost the number of dollar bills overflowing from his store’s lockers.

According to Euromonitor, US legal cannabis sales rose 30 percent to $ 22 billion last year, more than the $ 17.5 billion Americans spent on wine. Sales are expected to increase by more than 20 percent this year.

With only a handful of banks serving weed producers, some keep cash in safes [File: Reuters/Handout]The sales boom could have given cannabis companies more than $ 10 billion in cash last year, according to research firms Headset.io and New Frontier Research.

Big players can afford unmarked armored vans and heavily armed guards to transport money, but smaller operators have to rely on themselves.

A Los Angeles producer who refused to be identified said he would have to carry $ 120,000 in a bag and drive six hours from Los Angeles to Oakland to pay a supplier rather than take a flight and join one higher risk of being robbed or money will be confiscated by airport security.

On the last weekend in May 2020, when protests against police brutality and racism erupted in the United States following the murder of George Floyd, Leafly’s review of police reports and reports saw at least 43 attacks on pharmacies along the West Coast, according to business owners.

One of the stores attacked was Cookies Melrose in Hollywood, owned by rapper Gilbert Milam Jr., known by his stage name “Berner”.

The store suffered “high six-figure damage” when it was attacked by approximately 100 people on May 29, a spokesman said.

As cannabis legalization gains traction in the States – New York and New Mexico will allow recreational marijuana for the next several years – politicians are looking for ways to make banking services easier for the sector.

The House of Representatives passed law in April that allows cannabis companies to hold bank accounts, obtain loans, and accept credit card payments. It can’t get into the Senate, however, as Senate majority leader Chuck Schumer wants to work towards lifting the federal ban on cannabis instead.

A full federal green light is the industry’s ultimate goal, but it doesn’t count on Schumer’s promise to deliver by next year.

According to the AdvisorShare Pure US Cannabis ETF, stocks of US cannabis companies listed in Canada for being banned from US exchanges are up just 9 percent this year, up nearly 29 percent from their February high sunk.

Banking services for a premium

In the meantime, marijuana companies need to look for friendly banks.

Only 515 of the more than 8,200 federally registered banks and one in 30 credit unions in the U.S. were working with marijuana companies at the end of 2020, according to government agencies.

The service comes with a premium as the illegality of the federal government increases the banks’ paperwork.

As demand increases, investors are investing money in cannabis tech startups [File: Shannon Stapleton/Reuters]Chris Driessen, executive director of producer SLANG Worldwide Inc, said it cost his company $ 40,000 to access banking services in Colorado, just one of 12 states the company operates in. Typically, it costs less than $ 100 to open a business account.

Maps Credit Union is one of the longest-running financial institutions working with the cannabis industry. As of January 2017, Oregon has received more than $ 1.79 billion in cash from the Oregon sector. However, this resulted in the filing of tens of thousands of reports required for cannabis banking as per the guidelines of the Financial Crime Watchdog FinCEN.

“It is not cheap to serve these companies. It’s a completely different ball game, ”said Rachel Pross, Maps operations chief, referring to the use of expensive money laundering software, outside auditors and legal advisors.

Given the growing demand, investors have invested more than $ 2.5 billion in cannabis tech startups since 2018, and according to Viridian, specialist companies or SPACs targeting the broader cannabis industry have raised $ 3.9 billion to date.

However, within the industry, some cannabis managers are unable to obtain credit and don’t even struggle to keep personal accounts.

Cookies owner Berner said many banks have refused to contact him since joining the cannabis line in 2015.

“My clothing store made $ 32 million last year, but several banks asked us to leave,” he said. “You want to go into a normal banking business and just be treated like a normal person.”

The great migration from mainstream to cannabis jobs

Will I be arrested in South Dakota for using medical marijuana?